It’s like riding a bike…made of poverty and rejection

Drawing comics is the hardest thing any human being could ever do. Lance Armstrong had fucking steroids. You know what cartoonists have? A pen. It’s just you and a blank piece of paper. That’s one of the many reasons why the comics medium is so amazing. It offers so many opportunities. There’s no restrictions. The only limit is you. The only downside? No safety net. If you don’t know how to draw that dragon or that house or that arm everyone will know instantly. Because it’s there. It’s not right. It’s just sticking out saying, ” I’m not right. Look at me.”

I’m currently in the beginning stages of penciling. All the layouts are done and the rough shapes and angles are there but none of the specifics or details are laid down. I usually try and work pretty quick when I’m laying out a page. It’s very evident when something is working. Equally so when it isn’t. 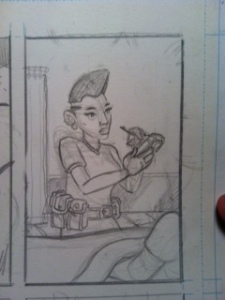 I’ve been blasting through things on the page I’m currently working on. I’m not sure if that’s because I’m rusty so I’m not seeing everything that I should be or if I’m just better at this than I’m remembering.

I’m really trying to push the expressions side of things. I’m having a hard time getting things to be as malleable as I’d like. This is the beginning of this comic though so, I’m sure by the end of it I’ll have Ye Ole ‘Oh FUCK’ face down pat. That seems to be the expression that comes up most often. 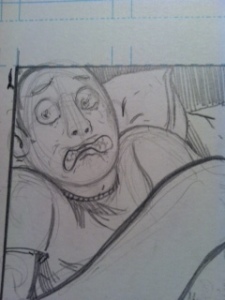 Drawing is a constant evolution. Or at least it should be. Finding stylistic nooks and crannies always get me really excited about the work I’m doing. Laying down the broad strokes of composition and narrative have their place too, but usually it’s the little things that get me jazzed.

In the second Action Hospital Robert and I are introducing a transgender character that has a robot arm. I got so amped about the idea of robot arms that I’m going to make them ubiquitous in our universe. Robot arms are the cell phones of the Action Hospital.

I really dig drawing nonsense tech. I suck at drawing ACTUAL tech. But if I can just put some weird plates and circles on shit, I’m a happy camper.

The title is from DC Comic Showcase #30. If you knew that: 5 points.