I’ve Seen The Future And It Will Be

Robert, and his lovely partner Sabrina, threw an Art Party last night. Which basically consists of a bunch of nerds sitting in a circle, drawing, and not talking to each other. This is how we socialize. Yes, we’re that cool. 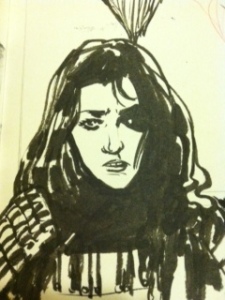 During the Art Party, Robert and I worked on Action Hospital pages. To say that we’re gentlemen travelers of the illustrated page might be appropriate.

There are many ways to make comics. Sometimes you just have to make them in a large group of people who are also making comics. 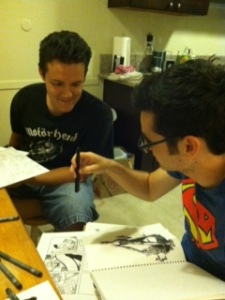 I’m not exactly sure what I’m miming in the photo above but I think it’s proper inking posture. Or it could be  that I’m about to show Robert how gravity works.

The pages are progressing at a steady pace. Robert’s really getting into a groove. Look at that Sibling enjoying her bowl of dirt. How awesome is that? The dude is really starting to kick into high gear.

Towards the end of the night our host Sabrina served us veggie and fruit smoothies. To say that making comics, drinking smoothies and then making some more comics is anything less than a perfect saturday night would be an egregious lie. 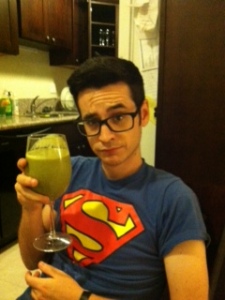 Also: can we just digress into douche bag Bro-town for a minute? Look at Sarah. How did I pull that shit? hubba hubba, man. I’ll take two with a side of hells yes. Thank you very much.

There’s really no reference in this post’s title. It’s just funny to put an F before Art it makes FART. No points.

And A Merry Comicsmass To All

Well, we’re rolling along. We’re now two pages deep into Action Hospital. It’s extremely uplifting to see the response from people. I can’t thank everyone who has been reading enough. It’s so gratifying to hear all your kind words. I suppose I should say ‘read’ all your kind words because most of my interactions about the book have been digital. Which is appropriate due to the fact that it’s a web/digital/future comic, right?

I’m so pleased with the response that we’ve got so far and I hope that it will only grow over time.

Robert’s Creature From The Black Lagoon says ‘Thanks everybody!’

Thanks again to my partners in crime Robert Negrete and Henry Barajas. They’re both super studs who are really studly. Also: they’re studs.

The VS System is hands down the greatest CCG (collectable card game) ever created. You can suck my fat web slinger, Magic: The Gathering. VS’s rules provided the most complex tableau of mechanics, the widest variety of customization, and the best gamer experience I’ve ever encountered. 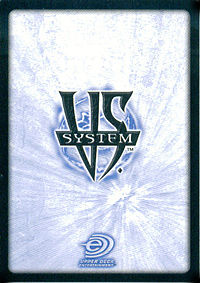 The game was put out by Upper Deck in 2004. It focused on Marvel and DC intellectual property based decks that the consumer could customize to reflect their personal aesthetic. Ultimately, the game became too complex and lost it’s casual fan base players, choosing instead to court a more hardcore market. This decision, coupled with Upper Deck’s poor managerial skills and a failure to continue running a pro circuit, eventually resulted in the game’s demise.

Since it’s death in 2009, Vs has survived thanks to a fervent fan base of internet fans and a select few store who still run hobby leagues.

Some people drink to relax, some people go out dancing, and some just sit at home an stare at a television set. I played VS. It was my weekly reprieve from the hardships of a monotonous routine. It stimulated me intellectually and allowed me to detox from the troubles of the week. VS helped me through some intricately difficult times.

Ever since the game died in 2009, I have missed it dearly. I have constantly craved the stimulation and mental challenges that it provided. I miss the game on a daily basis. It allowed me to interact with people and express myself and my interests in a completely safe way. The language of the game is highly customizable. Most players utilize overtly intricate in-game mechanics to reflect their personalities. I miss this release, terribly.

Yesterday, I received an email from someone that I had talked to maybe twice, inviting me to a VS tournament. A VS TOURNAMENT. This is akin to someone that you knew when you were 9 calling you up and saying, ‘Hey! Remember me? There’s gonna be a pogs tournament on Saturday. You interested?’ Of course I’m interested! Count me in. I’m there. With bells on and a Spider-man Legends Stall deck. Let’s do this, Spider-Friends. Let’s do this.

The Sudden Realization ( That Doesn’t Pertain To Mortality)

Chvrches has been playing in the background of my existence for a good four months. They’ve been a ubiquitous background noise. Mostly due to the fact that my best friend Kevin has had them on a constant loop. They airy female vocals coupled with the exceptionally dark lyrics and the upbeat synth-pop makes for an interesting cocktail. I’m not sure why it took me nearly four months to embrace the scottish trio’s music but I’ve now fallen head over heels for it.

I’ve been writing a web campaign for a company in New York this week and listening the Chvrches on repeat.