Let’s take a moment and congratulate Mr Robert Negrete for doing a wonderful job drawing the first issue of Action Hospital. Without his amazing line-work and emphasis on detail there would be no Younger and no Action Hospital. It’s just that simple. He’s a work horse and a talented guy. I’m luck to get to work with him.

I hop that you’ve enjoyed our story so far, and I hope that the next issue will keep you on the edge of your seat in the same way that the first issue did.

Life is a pretty strange thing. I know that seems fairly obvious but it’s pretty bizarre how things rapidly change, evolve, or otherwise transform in the blink of an eye.

I’ve been working like crazy on movie and comics stuff, as of late. If you’re wondering, Yes, Action Hospital Issue Two is all drawn and currently in the process of being lettered. This one will be a double sized issue coming in at round 18 pages. If you couldn’t tell by the cover, which just went up today, I’m drawing and writing this issue. Robert is hard at work on the third issue, which will feature the return of Younger the Vine Walker. For now we’re going to be following the cast of characters that I’ll be drawing. So, y’know, Boy Detectives. Hey, if it ain’t broke, don’t deviate away from what you know how to draw. 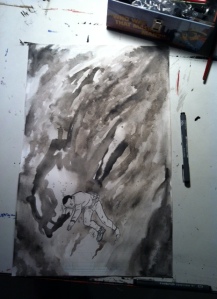 In progress cover to Issue 2

This past month has been an insane blur. I worked on a horror movie with some of coolest people I’ve ever met. I mean that literally. Previous to working on this film, I had been feeling tired, worn down, and just generally in a funk. Sure, it was hard work, but I had an amazing time working on this flick.

I suppose I should just tell you a little story, which will put this all into perspective. The first day I was on set, the producer of the film walked up to me and asked if I was ok or if I needed anything. This is unheard of. Producers usually don’t give two shits how you’re doing. They’re freaking out about the budget or about some actor who hasn’t shown up or about how they need a blue shirt for the scene because the wall behind the star is green. Something along those lines. So right out of the gate, I knew that this was going to be a fun job. If the producer is nice and calm that means that even when the shit DOES hit the fan everything will be fine.

Additionally, there was something familiar about this producer. I could swear that I knew her from somewhere but I couldn’t put my finger on it. Over the course of the first day, I had a few different opportunities to chat with her and she was one of the kindest and most honest people that I’ve ever met. I spent the entirety of that afternoon racking my brain attempting to deduce where I had previously made her acquaintance.

Towards the end of the first day I was chatting with the head of my department, a lovely girl named Aimee, and the topic of how nice the producer was came up.  Abruptly, she asked if I was a horror movie fan, and of course I said I was. She asked if I’d ever seen a film called Sleepaway Camp, to which I scoffed that of course I had. I loved Sleepaway Camp. Aimee, with a little glint in her eye, said that Felissa, the producer of our movie, was the star of Sleepaway Camp. And then it all came rushing back to me. Like that scene where Liam Neeson freaks the fuck out at the carnival in Darkman. There it was. I’d been talking to Angela Baker all day and I hadn’t known about it. My head exploded. 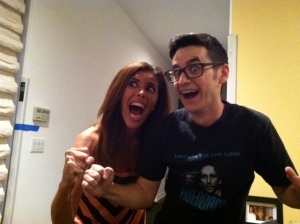 That’s the kind of experience I had. It was so much fun. I got to hang out with Beverly Randolf from Return of the Living Dead, Kim Poirer from the Dawn of the Living Dead remake, and a fine gentleman named Eric Roberts. It was insane. The entire cast was so gracious, so kinda, and completely the opposite of what you’d except. I spent the majority of the shoot desperately attempting to keep my cool. 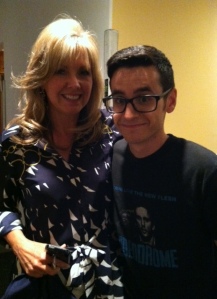 Beverly Randolf from Return of the Living Dead!

On the writing front I’m working on two different super sweet movie things that I CANNOT WAIT to talk about. I’m so ecstatic about them I’m bursting with excitement. One of the super top-secret things I’m working on is LITERALLY a dream come true. And that’s all I’ll say about that.

I’ll just leave you with this. I’ve been listening to it on repeat for a good week now. It just keeps getting better every time.